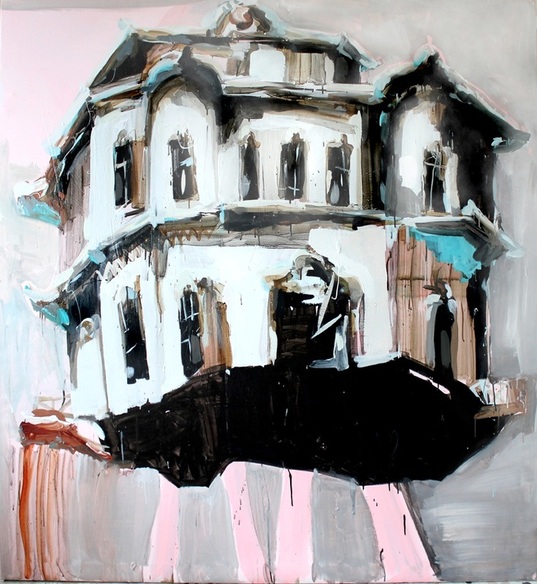 For his newest installation, Joe Davidson creates a hanging colonnade of cast plaster sunflowers.  The pendulum-like installations become oversized trophies, monuments to the repetitive acts of daily living. Davidson's sculptural forms are much larger and more coherent than the mere sum of its parts.  The stark white hanging "bouquets" of flowers, devoid of color, like bleached coral, are made up of hundreds of cast plaster sunflowers.  David Pagel of the Los Angeles Times refers to one work as "... a futuristic city or an upended window display from which all the trademarks and labels have been eliminated, like the flesh from the bleached bones of a beached whale's skeleton."  Each column becomes distinct as a new object in the world while referencing its source.  He does not attempt exact replicas of an original object; he creates shadows of the original.

Donald Lipski debuts a new body of large-scale works based on his Gathering Dust series.  Known for transforming found objects, pieces of detritus, and cast-off objects into provocative, amusing, and engaging pieces, Lipski's Gathering Dust series chronicled decades worth of tiny, compulsively made sculptures.  In his latest work, these miniature sculptures become larger than life in oversized prints. The artifacts of Lipski's art practice become specimen-like, with every minutia of detail evident for study, as in Gathering Dust:  Newspaper, wherein the delicate fibers of torn paper can be seen. The monumental prints record each sculpture as quiet, poetic moments apart from the greater installation of work that makes up Gathering Dust.

Danish painter, Mie Olise Kjærgaard's latest body of work continues her exploration of transformation.  These newest expressive and gestural paintings draw from her studies of abandoned ships and also from the architecture of Le Corbusier.  Her further investigation of Le Corbusier marks a natural progression in her work as Corbusier firmly believed that anyone could reinvent themselves.  Reinvention is central to much of Kjærgaard's work.  What was once an abandoned ship becomes a soaring, colorful dirigible while derelict bridges become ethereal light-filled spaces.  Contemporary dystopian realities are transformed into luminous "utopias of abandonment."

Joe Davidson lives and works in Los Angeles. He received his MFA from The San Francisco Art Institute, San Francisco, CA and received his BFA Sculpture at The University of Massachusetts, Amherst, MA.  He has exhibited throughout North America and Europe including Canada, Italy, and Great Britain.  Davidson received the C.O.L.A. Fellowship from the Department of Cultural Affairs, Los Angeles, CA., in 2009. He has been reviewed by many publications including the Los Angeles Times, Artillery Magazine, Artscene, and THE Magazine.
Click here to see Joe's CV and more examples of his work.

Donald Lipski is a sculptor living and working in Philadelphia since 2006. While best known for his poetic combining and altering of existing things, he has in recent years created many prominent and compelling public sculptures. Since coming to prominence with his Museum of Modern Art installation Gathering Dust in 1979-which consists of thousands of tiny sculptures pinned to the walls-his work has been shown in galleries and museums around the world, and he is in the permanent collections of dozens of museums, including The Metropolitan Museum of Art, The Whitney, The Menil Collection, and The Chicago Art Institute.  He is the winner of many awards and honors, including The Guggenheim Fellowship, National Endowment for the Arts Awards, and The Academy Award of the American Academy of Arts & Letters, and The Rome Prize.
Click here to see Donald's CV and more examples of his work.

Mie Olise Kjærgaard graduated with distinction from Central St. Martin's in London 2007 with an MA in Fine Art. Also in 2007 she was a finalist in the Saatchi Gallery Sensation Show and in 2009 she completed the prestigious Skowhegan artist residency, which was followed by a solo museum exhibition with an accompanying catalog at the Skive New Museum of Contemporary Art in Denmark. In 2010 she completed the International Studio & Curatorial Program (ISCP) in New York.  In the fall of 2011, the artist makes her Los Angeles debut with an extensive project at Honor Fraser Gallery in November of 2011 and in February 2012, Olise will have a major museum exhibition and publication with the Nikolaj Center for Contemporary Art in Copenhagen. Mie Olise is included in many important private collections and has most recently been acquired by the Museum of Fine Arts Houston. The artist currently lives and works in Copenhagen and New York.
Click here to see Mie's CV and more examples of her work.