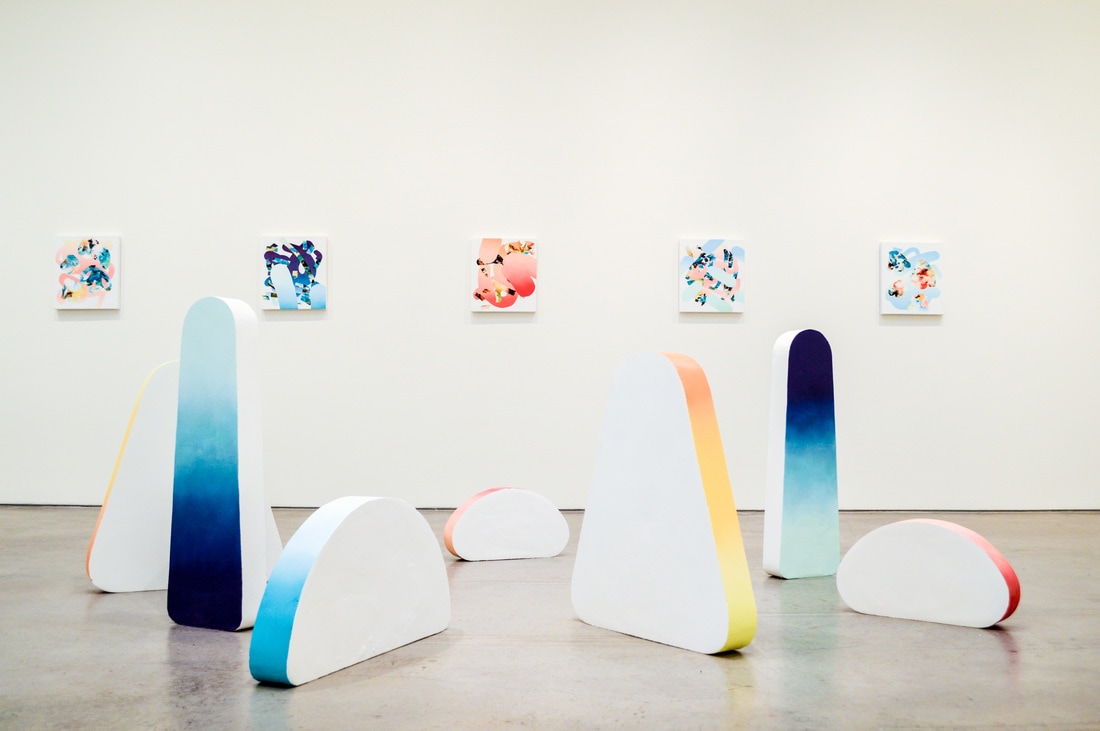 Installation, Swim, 2017
Barbara Davis Gallery is pleased to announce Swim, a two-person exhibition featuring Owen Drysdale and Rajab Ali Sayed. The exhibition opens July 7, 2017 with an artists' reception from 6:30 to 8:30 pm and is on view through September 2, 2017.

In these new paintings by Owen Drysdale, the artist considers society's ping-ponging of self-affirming information via social media resulting in digital echo chambers -- both in our newsfeeds and our memories.  Using color and gesture,

These layered paintings draw from  Drysdale's own constructed realities and fictionalized past, swimming through idealized memories of San Marcos. Built-up swaths of pastel gradients topped with dense brushes of bright colors recall summertime nostalgia;  bright, saccharine colors drip with reflection and apathy. The tones and textures constantly shift, paralleling the ever-changing nature of the internet and our perceived realities, while the calligraphic marks resemble those we make on our touch screen devices, sifting through data as the layers of the paintings shift on the canvas.

Rajab Ali Sayed's paintings create a dialogue about identity and representation within the history of painting. Sayed co-opts visual cues from historical paintings to express personal mythologies, placing male figures in compositions traditionally associated with female genre paintings, or leaving figures out of compositions to reflect on human presence in absentia. The paintings are detached observations but contain certain elements of wit and humor. There are reflections of romantic possibility, observing couples and other interpersonal relationships. Visual devices such as color and mark run through a series of paintings to continue the narrative. Sayed's style has an urgency that races to capture the details of time and space, fine-tuning visual elements to create psychological realism.

Owen Drysdale lives and works in Syracuse, New York, and will return to Houston summer 2017. He received his Bachelor of Fine Arts in painting from Texas State University, San Marcos, and his Master of Fine Arts from Syracuse University, New York. Drysdale recently participated in the Syracuse University MFA Artist in Residence Program in London. He has exhibited at Barbara Davis Gallery, Houston, Texas, and the Joann Cole Mitte Gallery I & II at Texas State University, including an exhibition juried by Claudia Schmuckli, former director and chief curator at the Blaffer Art Museum, Houston. His work has been featured in New American Paintings, The Houston Chronicle, Modern Dallas, and The Austin American Statesman.

Born to a Filipino mother and Pakistani father, Rajab Ali Sayed spent his childhood navigating two distinct cultural identities. He graduated from the National College of Arts, Lahore in 2013 with a Distinction in Fine Art, presenting an interdisciplinary thesis project in painting, video installation, and photography titled "Pretty Young Things". He also attended Augustana University in Sioux Falls, South Dakota and travelled the American Mid-West as a Fulbright Scholar. He now lives in Houston, Texas after graduating from the University of Houston's MFA program under the tutorship of contemporary artists Aaron Parazette, Gael Stack and Rachel Hecker.