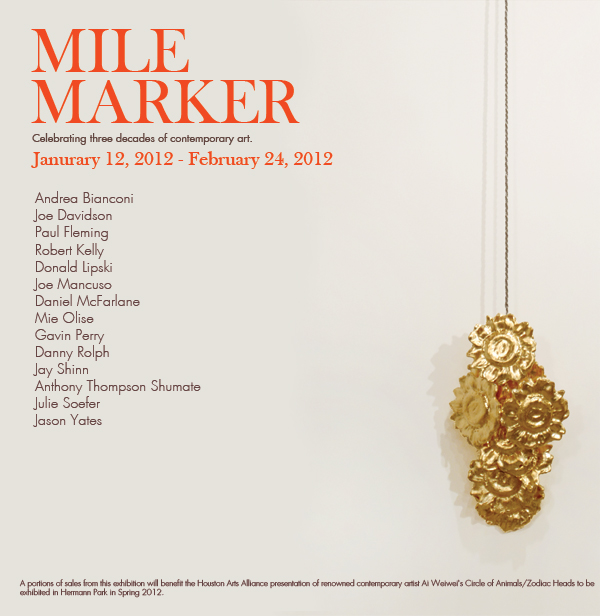 For 30 years, Barbara Davis Gallery has brought groundbreaking contemporary art to Houston.  Driven by her intuitive sensibilities and perennially fresh vision, Barbara has championed a generation of significant contemporary artists.  In the process she has challenged a generation of art collectors, both seasoned and aspiring, to see the beauty and value in their work through dialogs and panel discussions with prominent museum curators and artists from across genres.  She has launched the careers of international artists such as Julie Mehretu, one of the most important contemporary artists of our time, and Mie Olise Kjærgaard, a rising star from Denmark discovered in a Saatchi Sensations exhibition, having given Mehretu her first gallery exhibition and Olise her first U.S. exhibition. She was also one of the first to bring to Houston the influential names of Joseph Beuys, Kiki Smith, Jonathan Borofsky, Allan McCollum, and Gilbert & George among many others.  She brought progressive international exhibitions such as Leipzig Select, artists from the New Leipzig School, and exhibitions for Beijing East Village artists Zhang Huan and Li Wei.  Barbara Davis Gallery was one of the first Texas galleries to be included in the influential and prestigious Art Basel Miami Beach art fair.  The gallery’s exhibitions have been reviewed in international publications such as ArtForum, Art in America, Art News, Flash Art International, The Art Economist, and The New York Times among many others.  Her passion for exhibiting innovative contemporary art and her commitment to educating her collectors and the community has driven the focus of the gallery for 30 years. 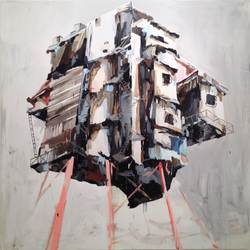 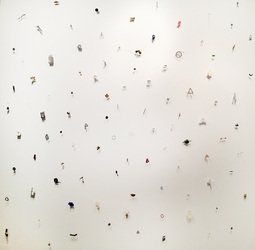 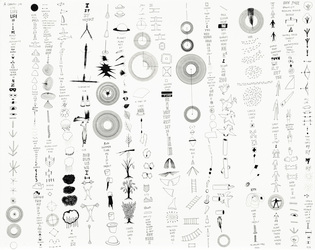 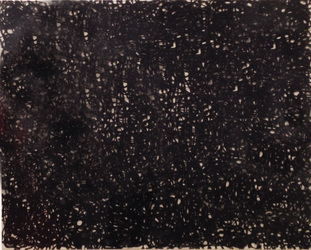 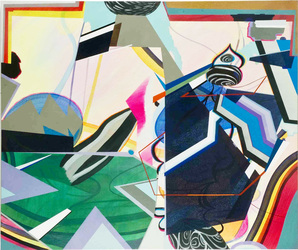 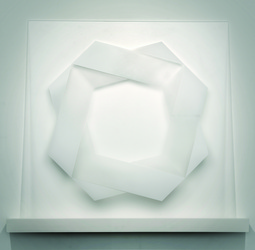 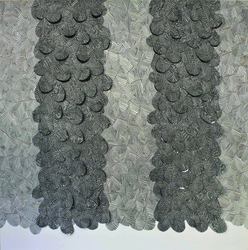 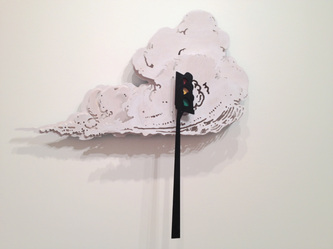 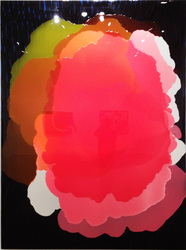 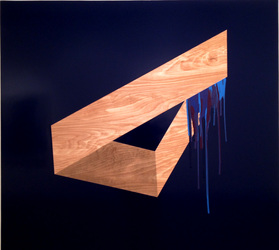 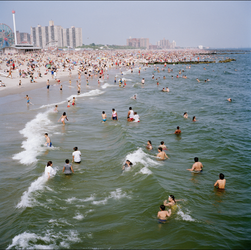 Andrea Bianconi was born in Arzignano, Italy, in 1974, and lives and works in New York and Vicenza, Italy.  He has had solo exhibitions at Furini Contemporary in Rome, Volta New York, the Embassy of Italy in Washington, D.C.; Spazio Obraz in Milan, Italy; and public art performances during the 2011 Venice Biennale, Venice, Italy; the World Expo 2010 in Shanghai, China; and at the Prague Contemporary Art Festival in Prague, Czech Republic.  He has also been included in a number of group exhibitions at the Lincoln Center, New York; Maraya Art Center in Sharjah, United Arab Emirates; Kunsthal Charlottenborg, Copenhagen; Swiss Architecture Museum, Basel, Switzerland; Paris, and Tina B.  Bianconi's work has been reviewed in Flash Art, Double Magazine, and Vogue Magazine, among others.  He has recently been published in a multilingual monograph by Charta Edition.

Joe Davidson was born in Milford, Massachusetts, in 1969, and lives and works in Los Angeles. He received his MFA from The San Francisco Art Institute, San Francisco, CA and received his BFA from The University of Massachusetts, Amherst, Massachusetts.  He has exhibited throughout North America and Europe including Canada, Italy, and Great Britain.  Davidson received the C.O.L.A. Fellowship from the Department of Cultural Affairs, Los Angeles, CA., in 2009.  He has been reviewed by the Los Angeles Times, Artillery Magazine, Artscene, and THE Magazine.

Paul Fleming lives and works in Houston, Texas.  He received his BFA from the Milwaukee Institute of Art and Design in 1995.  His solo exhibitions include Barbara Davis Gallery and Lawndale Art Center, Houston.  His group exhibitions have included Sergio Tossi in Florence, Italy; Art League Houston, Galveston Art Center, Galveston, Texas; University of Houston, AR Contemporary in Milan, Italy; Beaker Gallery in Tampa, Florida; and the Milwaukee Institute of Art and Design.

Donald Lipski was born in 1947, in Chicago, Illinois, and lives and works in Philadelphia, Pennsylvania.  He received his BA from the University of Wisconsin and his MFA from the Cranbrook Academy of Art in 1973.  His solo exhibitions include Museum of Modern Art (MoMA), New York; The Brooklyn Museum, New York; P.S. 1, Long Island City, New York; Capp Street Project, San Francisco, California; The Corcoran Gallery of Art, Washington, D.C.; Miami Art Museum, Miami, Florida; American Academy, Rome, Italy; and Bawag Foundation, Vienna, Austria.  Lipski's group exhibitions include the Whitney Biennial, Whitney Museum of American Art, New York; The New Museum of Contemporary Art, New York; Cranbrook Academy of Art Museum, Bloomfield Hills, Michigan; Walker Art Center, Minneapolis, Minnesota;and the Hudson Museum, Yonkers, New York.  His work has been acquired by private and museum collections including the permanent collections of The Metropolitan Museum of Art, The Whitney, The Menil Collection, Brooklyn Museum, Corcoran Gallery of Art, The Chicago Art Institute, Museum of Contemporary Art Los Angeles (MOCA), among others.  His awards and honors, include The Guggenheim Fellowship, National Endowment for the Arts Awards, The Academy Award of the American Academy of Arts & Letters, the New York Foundation on the Arts Fellowship, and The Rome Prize.

Daniel McFarlane was born in Houston, Texas, where he currently lives and works. He earned a BFA from Sam Houston State University and his MFA from the University of Florida.  He has exhibited at the Smithsonian Institution and JFK Center for the Performing Arts in Washington, D.C. His work has been featured in two consecutive years of New American Painting, first in the MFA Annual no. 87, 2010, and most recently, the West Edition no. 96 in 2011.  He recently completed the Lawndale Art center Residency Program. 2011 marked his inaugural solo-exhibition with Barbara Davis Gallery.

Mie Olise was born on the Island of Mors, Denmark, in 1974. She received her MFA from the Central St. Martins School of Art, London in 2007. She recently had solo exhibitions at Skive New Museum of Contemporary Art, Denmark, with accompanying catalog; Honor Fraser Gallery, Los Angeles; and the Nikolaj, Copenhagen Contemporary Art Center, Copenhagen, Denmark.  She was a finalist in the Saatchi Sensation Show, Saatchi Gallery, London and her work has been included in exhibitions at Ystad Museum of Art, Ystad, Sweden; Whitstable Biennale, Kent, United Kingdom; and Bloomberg Space, London. In addition to completing a residency at the Skowhegan School of Painting and Sculpture, Olise has also completed residencies at the International Studio and Curatorial Program (ISCP) in New York, and the NES Artist Residency in Iceland.  She has received awards from the Danish Art Council, the Rockwool Foundation, and the Niels Wessel Bagge Art Foundation. Her work has been reviewed by ArtForum, Art Review, FlashArt International, and Magazinet Kunst.

Gavin Perry was born in Philadelphia, Pennsylvania, in 1971, and currently lives and works in Miami.  Perry's exhibitions include Frederic Snitzer, Miami, Florida; Galerie Sultana, in Paris France; Art Basel, Basel, Swizerland; White Box, New York; and Buamet Sultana Gallerie in Mexico City and Paris, France.  Perry was awarded the prestigious South Florida Cultural Consortium which included an exhibition at the University Galleries of FAU.  His work has been reviewed by Flash Art, Art in America, Art Papers, and, in 2011, The Art Economist named Perry an Artist to Watch.

Danny Rolph was born in London, in 1967, where he continues to live and work.  Rolph holds an MA in painting from the Royal College of Art.  Recent solo exhibitions have included Koraalberg Gallery, Antwerp; Poppy Sebire, London; AR / Contemporary, Milan; Hales Gallery, London. Group exhibitions include Around the World in 80 Days, Torrance Art Museum, Los Angeles (2012, touring); Galerie Fruehsorge, Berlin; Drawing Room, London; Contemporary Art Space, Riverside, CA;University of Leeds Gallery, Leeds  and Southampton City Art Gallery, Hampshire.  Rolph's works have been acquired by public and private collections in Europe and the United States, including the Metropolitan Museum of Art and Tate, London.  A monograph entitled Happenstance was published by Broken Glass in 2007.

Anthony Thompson Shumate lives and works in Houston, Texas. He received his BFA from the University of Texas San Antonio and his MFA from the University of Houston.  The multimedia artist's solo exhibitions include Art League Houston and Apama Mackey Gallery, Houston, Texas.  His multi-media works have been included in the Athens International Film Festival, Athens, Ohio; L.A. Center for Digital Art, Los Angeles, California.  Group exhibitions include the Blaffer Gallery, University of Houston, Lawndale Art Center, Blue Star Contemporary Art Space, San Antonio, Texas, and Heuser Art Center, Peoria, Illinois.  In 2006, he was awarded a New Works Fellowship for Emerging Artist from the former Cultural Arts Council of Houston and most recently completed the Lawndale Art Center residency program.

Julie Soefer lives and works in Houston, Texas.  She received her BFA from New York University's Tisch School of the the Arts.   She was mentored by pioneering photographer, Arnold Newman.  Julie served as the still photographer for the feature film Super Size Me.  Her work has been published in The Financial Times, Texas Monthly and The Wall Street Journal.  Julie was recently chosen as a finalist in prestigious Hearst Corporation's 8x10 Photography Biennial.