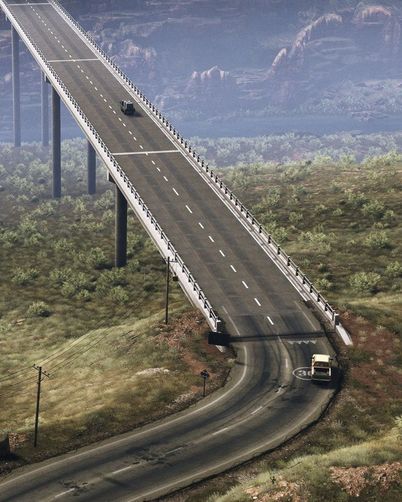 Justin Berry, Tabacal, 2018, chromogenic print, 42 x 33.6 inches​
Barbara Davis Gallery is pleased to announce two exhibitions, Justin Berry: Road Trips and Rebecca Gilbert: Last Year. The exhibition opening is April 6, 2018 with an artist reception from 6:30 to 8:30pm and is on view through May 12, 2018.

For this show, Justin Berry includes photographs taken from within video games.  Normally, taking a photograph is something that happens twice, once in the eye of the photographer and once through the mechanism of the camera.  With the photographs that Berry takes from within a video game, that duality collapses.  When he takes these photographs the camera and the gaze are the same, because the eye of the avatar is the camera itself.  Here, the player becomes the apparatus that takes the picture.  Duality is no longer about the camera and the eye but about the player and the played, the human and virtual creation whose senses they occupy.  Berry tries to reduce the distance between those two things, to find agency and meaning within the virtual worlds that he inhabits and to play the game not as a character written into someone else’s story, but as himself, and on his own terms.

Additionally, Berry includes a single photograph taken from a road trip in Nova Scotia. Both the virtual photos and the physical one were taken while on a journey, both were captured in stages, combining dozens, or hundreds, of images for each picture.  The only differences between the pictures are the places they were taken, the roads that were driven along to find them, and the lens through which the artist captured them.  Hanging them together, Berry explores what draws them together as well as what sets them apart.
​ 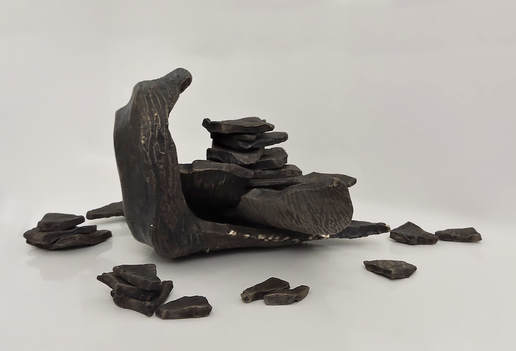 For this exhibition, Rebecca Gilbert shows sculptures alongside photographic collage, both in conversation with her continued experimentation in materiality and authorship. Sculptures in bronze and aluminum are copies of unused and discarded objects from around her home. Modeled by hand, these sculptures take on a new process-based studio practice for Gilbert. Bronze captures the remnants of a broken ceramic cup—the sculpture, made of over twenty small pieces of metal, resides in the precarious posture of stacked bits of clay as they were collected from the floor. Several of Gilbert’s sculptures are set on laminate blocks as staged arrangements, leaning on memories of her time working in a photography studio, as well as recalling the still life tableaus from painting class in art school. Formica laminate references her kitchen countertops, the place upon which many of these compositions take shape. A select few works are made from direct molds of objects and body parts. Whether it be the exaggerated fingertips of a woman’s hand or a cast of cartoon breasts from a 1960s souvenir, these sculptural copies reveal the entangled history of designed objects and female anatomy.

Gilbert uses components appropriated from both her personal life and popular culture to grapple with a connection to, and dissolution of, the mass produced and the burden of nostalgia. Her collage works are compiled of photographs, digital scans, retouching inks, correction fluid, and repetitive portraiture. These works are studies in repetition, invested in the notion of mise en abyme, where the reproduction of imagery will find itself nested within and beside its original state. The color photographs in this presentation are from a single roll of film that Gilbert took as a teenager, for which she found redundant photographs of herself, her sister, and flowers of the same color. Last Year explores reproduction as a studio practice as well as a passage of time.

Justin Berry is a recipient of the 2014 NYFA artist's fellowship. He has a full-time appointment at the Yale School of Art as a Critic and as Core Faculty at the new Center for Collaborative Arts and Media. His work has been exhibited internationally in various venues, with work recently on view at the B3 Bienalle in Frankfurt GE, Noorderlicht in Gronigen NL, the Altonale in Hamburg DE, Wave Hill and Essex Flowers in New York, Artspace in New Haven, CAVE in Detroit, CUAC in Salt Lake City, and the University of Richmond Art Museum. Issues of Artforum, Art Review, Frieze, Pin-up magazine, Media-N, and others have included features on his work and Bomb Magazine commissioned the piece i-would.com from him as part of their portfolio series in 2013. From 2007 to 2008 he was co-director of the artist run curatorial space Alogon, in Chicago, IL and a member of the New York based collective Essex Flowers from 2014-2018. He holds an MFA from the Art Institute of Chicago.

Rebecca Gilbert earned her BFA at The School of The Art Institute of Chicago and MFA at Hunter College in New York, where she lived and worked for ten years. Gilbert’s work has been exhibited at Brennan & Griffin, New York; Cleopatra’s, Brooklyn; Essex Flowers, New York; Cave, Detroit; Interstate Projects, Brooklyn; Shoot The Lobster, New York; The Invisible Dog, Brooklyn; The Royal College of Art, London; The Pigeon Wing, London; Alogon, Chicago; as well as the Material Art Fair in Mexico City. They live and work in New Haven, Connecticut.